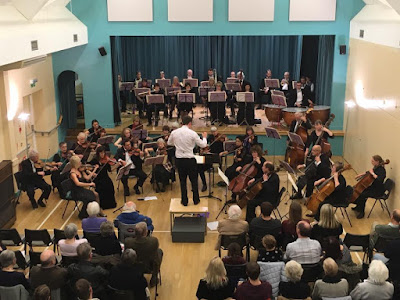 On Saturday 12th November, I had the pleasure of attending my first ever North Downs Sinfonia concert. It was a very special event, as it was their Tenth Year Anniversary Gala Concert. Held in our very own Tatsfield Village Hall, it was an evening filled with music written by some of the greatest composers that ever lived, and performed by talented and enthusiastic amateur musicians from not only Tatsfield, but also neighbouring villages, and a couple from as far flung as Birmingham! This wonderful orchestra and its’ composers have entertained audiences with twenty concerts, playing to a packed house every single time. What was all the fuss about? Well, I soon found out…

The concert got off to a great start with Mozart’s “Marriage of Figaro” overture. This apparently was a piece that was played in the first ever NDS concert, and it was not to be the only piece of music which would have a particular significance in the evening. The humour and the “madness” of the opera was brought to the fore with enthusiastic playing from the orchestra, and led by a vibrant and physically dynamic Jonathan Maynard as conductor. The energy of the ensemble and its’ leader was enough to get the audience in the mood for an evening of beautiful concerti and symphonies.

After this excellent “warm up”, our very own village Maestro gave an introductory speech about the origins of the NDS, its’ founders, and his personal involvement and journey from being a young flautist, to his position as conductor. He spoke emotionally about his mentor David Preston, who taught and inspired him throughout his musical career, leading up to the point of literally passing the baton on to his young protégé.

This heartfelt introduction led beautifully on to a tribute to David Preston in the form of Faure’s Pavane. The tender beginnings of the piece were delicately handled, as Maynard conducted the strings’ pizzicato and a lone flute in a melancholic melody, before building and being joined by the other instruments as the music swelled and developed. It was a moving rendition, and one that I’m sure did justice to the memory of a much loved man.

After the Pavane, Maynard again addressed the audience, this time taking the opportunity to thank family, friends and the village for years of support, encouragement and excellent tea making! It firmly established the NDS as a well-loved, local treasure. We were then informed that the next piece of music was actually the Orchestra Members’ Choice Piece; The 4th Movement of Dvorak’s mighty 9th Symphony. Listening to the company going to town with the score, it was no surprise that this was their choice. Each section of the orchestra played their hearts out, and had a chance to shine. I particularly enjoyed the brass section playing with vim and vigour!

The 9th is a tremendous symphony, and the 4th movement is particularly energetic and dynamic, which gave the players a chance to showcase exactly why they enjoy being together on stage so much, and why some members, like Orchestra Leader Sylvia Seaton has been with the NDS from the start, and still going strong, playing her violin magnificently. I feel a special mention here must go to Simon Heydecker-Dent on timpani, who always seemed to be smiling, whilst keeping an eye on his conductor, as he played his set with great skill. The movement ended with real strength, and a smile on the faces of everyone in the village hall!

Rachmaninoff’s Piano Concerto No. 2 was next in the evenings’ repertoire, with Mariela Cingo taking on the concerto on the village hall piano! She played the piece entirely from memory with no score sheet in front of her, and as her fingers flew over the keys, it was apparent that she loved playing it. It is a technically challenging score which the orchestra played well, especially at the climax where the strings swept us along to the romantic conclusion, ending with a flourish. This was the Audience Choice, and was clearly a huge hit.

At this point, the musicians took a well-deserved break, and the audience drifted off for the refreshments which were served during the interval. Whilst sitting down with my son and discussing the music, (which we were both thoroughly enjoying), we overheard several snatches of conversation from happy and satisfied members of the audience, many of whom had attended several previous NDS concerts, and all seemed to be having a great time.

After the interval, the beautiful Cello Concerto in E Minor by Elgar was offered up to us, and it was this which was my personal highlight of the evening. Unfortunately, the original cello soloist was unable to perform, so the incredibly talented Samara Ginsberg was drafted in at the eleventh hour. For me, this cello concerto is synonymous with the extraordinary Jacqueline du Pre, and her outstanding recording and interpretation of the piece, and that is an exceptionally high standard to live up to. However, Ginsberg played beautifully, with confidence and great feeling. I was also pleased to see her connect with her fellow cellists, thus including them and the rest of the orchestra in the music. The concerto was punctuated by tumultuous applause, and rightly so.

By way of ending the evening, Maynard addressed the audience, saying that he needed to play percussion, and wondered whether anyone would like to conduct Strauss’ Emperor Waltz! After offering his baton to his Granny and a small girl, (both of whom politely declined), Maynard alighted on a gentleman who said that he would “give it a go” - cue a couple of well-received “which way up should I hold the baton” gags! Of course, it transpired that this fine bearded, and well-placed fellow knew exactly what he was doing, and led a superbly rousing rendition of the waltz, much to the amusement of the audience.

Johann Strauss II is a composer whose music never fails to bring a smile to my face and a lightness in my heart. Hearing this wonderful piece of music brought to life by a “random” member of the audience who was clearly having a whale of a time, and seeing how the orchestra responded was an absolute joy, and a perfect way to round off an enchanting evening.

I left the hall with a feeling of gratitude towards all of the people involved, from Jonathan Maynard and his talented musicians, to those behind the scenes, and to the villagers who support the orchestra. I wonder how many other small villages can boast that they have their own Sinfonia? I for one, am glad that we can!

One final point, I missed the opportunity to cast my vote for the Audience Choice, so I would like to request the vibrant and dazzling Danzon No 2 by Arturo Marquez. I think the NDS would have great fun playing it, and it would suit them down to the ground. Just saying…